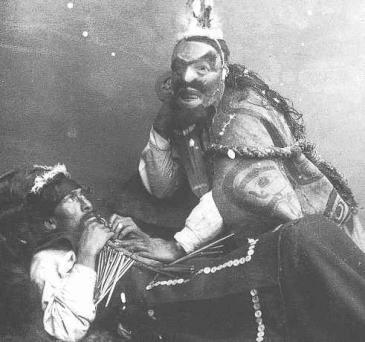 Many of us have an image of shamans as people, usually in a pre-literate society, who would have an apparent resource pool of knowledge and/or wisdom to be shared with the rest of the immediate tribe, culture, or society.  These might be the Native American medicine men, or the shamans of Northern Europe before the periods of the Renaissance and the Enlightenment.  They might be called on to know the use of certain medicinal herbs and vegetation, or they might be considered the bridge between the regular society and the supernatural world that was not known to the ordinary members of their society.  And most of us feel that today, with the knowledge explosion that we have experienced, that the shamans have gone the way of the Dodo bird.  But that may not necessarily be the case.

The language of the rational mind is science, math, logic, etc. and is designed to reveal that which is True or Not True which leads to Knowledge.  The language of the intuitive mind is story or metaphor, and is designed to reveal Truth.  There may be several Truths in an issue and some of these Truths may actually be opposite of other Truths as opposed to Aristotelian logic.  And this leads to Wisdom.

Stories are great ways to communicate Wisdom, but the problem comes when someone tries to pass off a story as science rather than as a story.  There is an appeal to present something as science because that indicates that it is true for everyone (except for those who deliberately refuse to accept that which is True).  A shaman in olden times would present his stories of medicine, science, and religion in such a way that it was to be accepted as True, and never questioned or examined or investigated.

Today we still have people who try to pass off stories as if they were science and should not be questioned.  Many scientists and people who feel they are Rationalists will pass off what would be best called stories as if they were science.  Science is good at defining “What” and “When” because these questions are answered by observation and make something “scientific” by being predictable.  However to answer the questions of “How” or “Why”, we usually have to turn to stories as these are not based on observable phenomenon.

For instance, science can identify the opposable thumbs on people and can even identify the other primates which do and do not have an opposable thumb.  However science cannot define “How” or “Why” these opposable thumbs came about.  We do not know if they came by a gradual shift away from the fingers over time and perhaps are still shifting or if they just developed originally in their current position.  And a scientist might say that the reason is “so that we could grasp a branch more securely when we were aboreals” and living in trees.  These explanations are not based on observations and should be considered stories rather than science.  It is best to say that these explanations are “As if …” rather than that these explanations are True (i.e. scientific).

And many religions today, especially the Fundamentalists, are guilty of taking the round stories and trying to force them into the square holes of science.  The classic example is the story of creationism.  As a story trying to explain some Truth such as “Why” there is evil in the world, this story might have some benefit.  But when this obvious story is presented as science, or as True, there is a problem.  I can hear the myth of Pandora and appreciate the story describing the existence of all the Troubles and Problems in the world and the one ray of Hope that is there to conquer and overcome all these Troubles and Problems.  But I’m not going to say that it is a scientific fact and present it as science.

Some scientists and some Fundamentalists are like the shamans of old.  They present their stories but in such a way that they are not to be questioned or evaluated or investigated through the rigors of science.  Although scientists may have a depth of knowledge that we do not, we still can have the Wisdom to discern when we are being told scientific evidence, and when we are being told a story.  And since each of us, as Humanists, are responsible for our own Truths, and for our own exercising of critical analysis, we have a responsibility to discern the difference between stories and science.