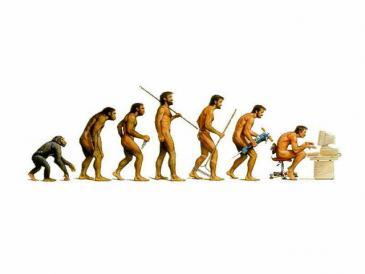 The following blurb was in today's Writer's Almanac (from Garrison Keillor) on the anniversary of the great Huxley-Wilburforce debate on evolution,

On this day in 1860, a debate on the merits of the theory of evolution took place at Oxford University. It occurred as part of the annual meeting of the British Association for the Advancement of Science. Darwin's book On the Origin of Species(1859) had just been published seven months earlier, and was hotly contested by scientists and theologians on both sides of the issue. Noted biologist Richard Owen had written a scathing review of the book in the Edinburgh Review, and he also coached the Bishop of Oxford, Samuel Wilberforce, in his condemnation of the book. On the pro-Darwin side of the issue were several liberal theologians — including mathematician and priest Baden Powell — as well as scientists Joseph Dalton Hooker and Thomas Henry Huxley. Huxley was such an ardent and vocal supporter of evolutionary theory that he came to be known as "Darwin's bulldog."

Bishop Wilberforce, one of the most famous orators of the day, was to be one of the speakers on Saturday the 30th. The hall was packed and hundreds lined up outside to hear the discussion, which came to be known as the Wilberforce-Huxley debate (or the Huxley-Wilberforce debate, depending on whose side you were on), even though there were many contributors to the discussion. There is no transcript of the day's events, but one exchange has reached the status of legend. Wilberforce asked Huxley whether he was descended from an ape on his father's side or his mother's, and Huxley retorted that he was not ashamed to have a monkey as an ancestor, but he would be ashamed to descend from someone who used his great gifts to obscure the truth. Most accounts include some version of this story, but according to Hooker, that may have been all that most people heard. In his report to Darwin (who was too ill to attend), Hooker wrote:

"Well, Sam Oxon got up and spouted for half an hour with inimitable spirit, ugliness and emptiness and unfairness ... Huxley answered admirably and turned the tables, but he could not throw his voice over so large an assembly nor command the audience ... he did not allude to Sam's weak points nor put the matter in a form or way that carried the audience. The battle waxed hot. Lady Brewster fainted, the excitement increased as others spoke; my blood boiled, I felt myself a dastard; now I saw my advantage; I swore to myself that I would smite that Amalekite, Sam, hip and thigh if my heart jumped out of my mouth, and I handed my name up to the President as ready to throw down the gauntlet."

Hooker was the closing speaker of the discussion, and he felt thathis speech had carried the day (of course, Wilberforce and Huxley each felt the same way about their own speeches). In the end, though each side claimed victory, most accounts chalk it up as a win for the Darwinians.