The Business of Government -- Prayer and Pledge Go Hand-in-Hand 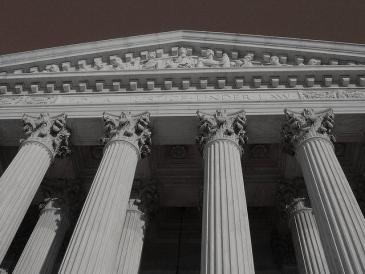 I am extremely disappointed in today's Supreme Court decision (Greece v. Galloway) affirming that sectarian prayers at city council meetings do not violate the Establishment Clause of the First Amendment.  The 5-4 decision severely diminishes the non-establishment principle and effectively endorses majoritarian displays of public piety.

The notion of public prayer before council meetings is itself rather weird, a 'theological/religious' notion that praying somehow leads to better government, or that some supernatural entity will show favoritism to get better roads in communities that pray.  This is naked superstition, a bow to witchcraft-like incantations, and acceptance of magical thinking. Like school kids praying before an exam---but it is better to have read the assignments and done the homework.

It is wholly disingenuous to imagine, as Kennedy does, that public prayer is not subtly coercive.  It should be obvious that such prayers create an atmosphere that a certain god has to be prayed to to win its favor.  And surely such prayers promote the idea that the government favors some religions or some gods over others.

It is made worse by having the Pledge, with the phrase "under god", following the prayer. The linkage between a prayer and a god-belief as being vital for genuine Americanism is obvious.  That prayer and Pledge go hand-in-hand reinforces the notion that a certain god or religion is more "official" and patriotic than others.

It is also rather weird to imagine that clergy who pray such&such have some insight that others do not have.  Clergy, of course, are not elected; and have as their agenda, continuing income from their congregation.  City councilors have an agenda to get re-elected by doing good for their communities.  There is a difference.

The decision wholly ignores non-believers, non-theists, atheists who have no use for prayer to an imaginary deity.  It is even an affront to the Founding Fathers, many of whom were Deists, who rejected the notion that God would intervene in human affairs as a result of supplication and worship.  George Washington, Madison, Jefferson, Franklin, even Adams, would be appalled at today's decision.  The idea of a government body paying obeisance is anathema to the legacy of Roger Williams.

The decision is a major attack on a memorable phrase from the Supreme Court's Engel decision (1962):  "It is no part of the business of government to be composing prayers..."  This principle is a vitally important reminder.  What is the proper business of government?  Is having a prayer calling on Divine Providence and some dogma about Jesus going to help with the sewer works?

The decision will do no good for public policies, no good for good government, no good for welcoming minority participation in community government, and will only reinforce various power structures that buy into the majority religion.