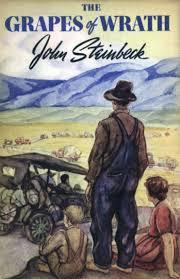 To me, Humanism uses the Humanities to help Humanity.  (That’s an original as far as I know.)  With that definition, I would like to present two quotes from the humanities, history and literature, and use them together to try to develop some compassion for the vulnerables in our present-day society.

George Santayana, a philosopher, essayist, poet and novelist is quoted as saying, “Those who cannot remember the past are condemned to repeat it.”

John Steinbeck wrote The Grapes of Wrath which many of us read many years ago.  Howeverr we were probably too caught up in the story of the plight of the dust bowl migrants to have caught the significance of the title and how that significance applies to today and the vulnerables in our own present-day society.

[Ed: is this a quote from "The Grapes of Wrath" or did Steinbeck take his title from this but it has another source? I know it's the former but you should make this clear.]

“And the great owners with access to history, with eyes to read history and to know the great fact: when property accumulates in too few hands it is taken away. And that companion fact: when a majority of the people are hungry and cold they will take by force what they need. And the little screaming fact that sounds through all history: repression works only to strengthen and knit the repressed. The great owners ignored the three cries of history. The land fell into fewer hands, the number of the dispossessed increased, and every effort of the great owners was directed at repression. The money was spent for arms, for gas to protect the great holdings, and spies were sent to catch the murmuring of revolt so that it might be stamped out. The changing economy was ignored, plans for the change ignored; and only means to destroy revolt were considered, while the causes of revolt went on...and in the eyes of the people there is the failure; and in the eyes of the hungry there is a growing wrath. In the souls of the people the grapes of wrath are filling and growing heavy, growing heavy for the vintage.”

One possible deconstruction/reconstruction of this passage could be the following:  (Perhaps in the vein of Derrida?)

1) The “Haves” have access to lessons learned throughout history.

1)  When property and money is owned by too few people, it is taken away [Ed: taken away from the haves or the have-nots?]

2)  When the “have-nots” become a majority and are hungry and cold, they will seize what they need

3)  Repression works only to strengthen and build the repressed

2)  Society is in a time of crisis

1)  Lessons of history are ignored

3)  The numbers of the lower class are increasing

7)  The National Debt, paid mostly by the 99%, is increasing because of increased wars

9)  The tanking of the economy is ignored

10)  Efforts to change the economy are obstructed

12)  The causes of dissent, unemployment, lack of education, and lack of hope are never addressed

13)  In the eyes of the people, there is failure and the lowest approval ratings in history

14)  In the growing ranks of the Working Poor, there is a growing wrath

15)  “In the souls of the people the grapes of wrath are filling and growing heavy, growing heavy for the vintage.”

The last point did not need to be reconstructed.