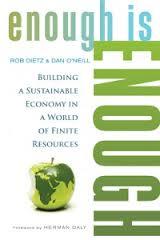 “Enough is Enough”   by Rob Dietz and Dan O’Neill

As the authors say in their Preface, “Enough is Enough was conceived as a collection of policy proposals for achieving a prosperous, but non-growing economy (known as a steady-state economy)”.  So it is an apologetic for steady-state economics.  (“Apologetics – the discipline of defending a position through the systematic use of information. Wikipedia)  As such, it deals with ecological economics at the macro level and integrates all the systems necessary for a global approach.  The book argues for a paradigm shift from the current approach of “A larger economy implies progress” to an approach where “Enough is better in order to sustain our ecosystem”.  It defines economics as a means of controlling all the systems within our ecosystem rather than define economics strictly in terms of the managing of the scarce resource of only money.

Part I raises the “Questions of Enough”, Part II the “Strategies of Enough”, and Part III “Advancing the Economy of Enough”.  This book does a good job of sounding the alarm that there are many problems with the current economic systems.  What is different about this book from the many other books that also sound the alarm regarding the issues of Sustainability, is that it tries to present the problems and the solutions to these problems with a label – “steady-state economics”.  So it sounds as if it alone is sounding the clarion call for solutions and doesn’t give credit to the many other Sustainable causes such as Triple Bottom Line Accountability, Conscious Capitalism, Natural Capitalism, Shared Value Capitalism, Creative Capitalism, B Corporations, etc.  Of course, this is a problem shared by all of these approaches who try to limit themselves by attaching a label if they present themselves as “the” solution rather than “a” solution.

This book is meant to provoke (in a good sense) discussion around its own policies and provide fodder for discussions around the policies of governments and corporations, but it totally ignores the NGO and grassroots sector.  It is written in an informal style and although there are many facts, figures, charts and references to economic terms, it is written to be understood by laymen.

It does a good job of describing our current culture in terms of consumerism where we want “more objects, more food, and more resources such as energy” where we should be creating, instead, a culture which values “doing, being, and connecting”.  Because our planet is finite, we cannot consume indefinitely and so it is our responsibility to see what and how much we should consume in order to be sustainable.  Sustainability can be defined as “What do we need to do today to assure that we will be just as viable in 50 years?”  To answer the question of “How much can we consume”, they quote Herman Daly:  “(1)  Exploit renewable resources no faster than they can be regenerated; (2) Deplete nonrenewable resources no faster than the rate at which renewable substitutes can be developed; and (3) Emit waste no faster than they can be safely assimilate by ecosystems.”  The book does a great job of expressing the problems we face not just in terms of ecological sustainability, but also social sustainability and personal values.

Several strategies are presented for passing through these States to reach the point of SSE.  The first strategy is to limit the use of materials and energy to sustainable levels.  Because we are already beyond the “Safe Operating Boundaries” of three of the seven identified planetary processes - Climate Change, Biodiversity Loss, and Nitrogen Cycle – we need to cut back immediately.  These cutbacks may be by direct interventions such as bans, rationing, tradable permits, or “cap and share” or they may be by indirect interventions such as ecological tax reforms, or conservation of natural areas.  This cutting back should be done in a way to assure that we achieve a more equitable distribution of income and wealth and should include a comprehensive monitoring system.  What is needed in changing to these States is heavy cooperation across all levels of governments.  Governments need to experience a paradigm shift from one of competition and control to one of collaboration and cooperation.

It is important to stabilize population through compassionate and non-coercive means.  Since this issue is tied to divisive topics such as poverty, reproductive health, women’s rights, immigration, and cultural religious beliefs, this strategy needs to be dealt with not only politically but also culturally with the key being the empowerment of women.  Another recommendation for this strategy is to change immigration policy to achieve equal levels of immigration and emigration.

Another strategy is to achieve a more favorable distribution of income and wealth (or assets).  The key here is to put control of companies, government agencies, and nonprofit organizations into the hands of the people who work in them, use their services, or live in the communities affected by them.  This is known, in other approaches, as creating a paradigm change from focusing on the shareholders to focusing on all of the stakeholders.

Probably one of the most controversial strategies addressed in this book is to reform the monetary and financial systems.  It is evident that the current system is broken and needs to be fixed.  But if there are to be limits on economic growth, then there should be limits to debt and limits to investments.  The book promotes a neutral international currency that is not controlled by any single country or group of countries.

As stated above, we need a comprehensive monitoring system to replace our GDP as the GDP does not measure the values of our culture – only the output of our society.  It suggests a measurement called the Gross National Happiness (GNH) monitor which is currently being used in a few areas.  The four pillars of GNH are the promotion of equitable and sustainable socioeconomic development; Preservation and promotion of cultural values; Conservation of the natural environment; and the Establishment of good governance.

The next strategy is to secure meaningful jobs and full employment.  I was pleased to see the authors recommend looking at the Civilian Conservation Corps (CCC which included the Work Projects Administration - WPA) that brought us out of the depression.  It states that guaranteed jobs are included in Article 23.1 of the United Nation’s Universal Declaration of Human Rights (UN UDHR).  (However it did not mention that although the United States had ratified the political section of the UN UDHR, it had refused to ratify the social section which includes this right.)  The book gives good examples of less-work societies by presenting the European work-time policies which are much more favorable to the workers than here in the US.

The last strategy presented is “Enough Business as Usual:  Rethinking Commerce”.  Instead of placing the ROI to shareholders as the highest value, businesses need to address the value they create in the social and environmental sectors.  This is to have the businesses driven by purpose to the ecosystem and society rather than duty to the shareholders.  There are several business models already in existence in the US such as the Low-profit Limited Liability Company (L3C) and the B-Corporation where dividends to shareholders are limited and where the purpose is for the community or wider public interest.

After describing these strategies, the book details what is necessary to advance the Steady-State Economy.  One of the biggest ways is to change consumer behavior to seek personal values rather than status.  The goal of the management of a society should be to provide the resources (time and opportunities) for each member to achieve a state of “well-being”.  For members in our society to achieve well-being, instead of relying on consumerism, they should strive to connect, be active, take notice, keep learning, and give.  Politicians and the media should be held accountable to consider the “constant growth of GDP” paradigm and consider the paradigm of a steady-state economics.    I would include a call for controls on the lobbyists and the influencers of Congress as needed for such a transformation.

Since this transformation is global, it requires all the nations to work together as one nation cannot address these issues as an isolate.  The book discusses the need for the United Nations, the World Bank, the International Monetary Fund and the World Trade Organization to be democratized and work together collaboratively.

The book does a good job of identifying several problems with our current economic system driven by consumerism and the goal of “more growth”, and also does a good job of providing a lot of food-for-thought for several solutions.  However because these strategies are presented in one, all-unifying package of steady-state economics, it is difficult to see how these strategies could be applied piecemeal, or along with other approaches, or from the micro-level of a nation to say nothing about an individual or a civil service/grassroots organization (CSO).  It is evident, though, that the problems we are currently experiencing today are of such a magnitude that the solution needs to be a complete transformation rather than just a fix.  It would be great to see some dialogues on steady-state economics where these as well as other approaches could be discussed and especially if they could lead to some deliberations on actions.