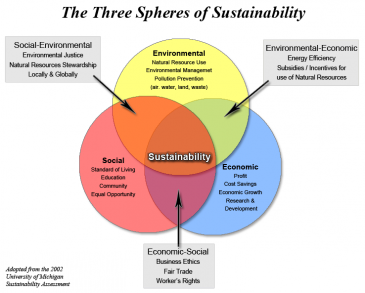 Shortly after I returned, I wrote this blog post but didn’t have a blogging site at that time.  So I am including it here and now.  This will be used as a basis for several posts I plan to publish on the United Nations’ Sustainability Development Goals (SDGs) for heir 2015 and Beyond program scheduled to replace the Millenium Development Goals for the civil sector combined with their Global Compact for the business sector.

I have just returned from one week of intensive training for Sustainability consulting and Sustainability reporting for Small and Medium Sized Enterprises (SMEs).  This was through the United Nations Industrial Development Organization (UNIDO) in Vienna, Austria.  UNIDO is the only United Nations agency tasked with developing jobs and work opportunities in the developing countries.  (The other agencies, like UNICEF, WHO, etc give aid and assistance to people in the least developed countries.)  Of the 20 attendees, 4 were from Croatia, 3 were from Bosnia, and one each from several countries including Ecuador, Moldova, Ukraine, Greece, Austria, Germany, etc.  I was the only representative from the United States and was also the only one there not involved in consulting in a developing country.  I was there not because of my job, but just because I have become very involved in many aspects of the United Nations as a personal interest and as a hobby – especially with their Global Compact.  As such, I have become quite involved with the United Nations Global Compact which is the UN’s work with the business sector in assuring that businesses are run in a Sustainable fashion.

As a quick explanation of business Sustainability, it is determining how a business should operate now so that it will be viable 50 years from now.  (Later, I will discuss how this can apply to us as individuals who are Humanists.)  This approach has evolved to be centered on what is called Triple Bottom Line Accountability (TBL)  Instead of just “the bottom line” of a business, which infers just the financial bottom line, TBL includes a bottom line accountability of Environmental and Corporate Social Responsibility (CSR).  (Triple Bottom Line accountability is also known as Profit/Planet/People accountability for those who like alliterations.)  A company is not considered a viable company if it is successful financially, but irresponsible environmentally.  At the same time, a company cannot do something for the environmental that is good if that means it will fail financially.  The same is true with Corporate Social Responsibility.  A company must operate responsibly in all three areas.

A company must perform environmentally in such a way that it will be viable in the future – that is, it cannot be depleting resources which will adversely impact the business later.  As an example, I work for a large Fortune 200 company.  They performed an energy audit and discovered that they could not continue to use their energy resources in the same trend and be viable later.  They discovered that within 25 years, between the increase in energy consumption and the increase in energy prices, they would not be viable.  They would not be able to afford the energy that would be consumed if they did not resort to energy conservation and/or energy alternatives.  And they can look at other environmental aspects and see that they need to change their whole approach to include ideas such as recycling, conservation, etc.

The same was true with Corporate Social Responsibility (CSR).  CSR involves both the external stakeholders (shareholders, supply chain companies, customers, etc.) as well as internal stakeholders (employees and middle management).  They discovered that projecting ahead 50 years, they would not be able to draw on the available workforce the people they would need unless they changed.  There will not be the demographics of white, male engineers available for them.  So they have instituted many changes to become an “Employer of Choice” to appeal to many of the minority groups, and women.  They have also seen that of the four generations of workers now in the work force, the youngest generation is motivated most by “making a difference”.  The younger generation wants to work in jobs where they can make a difference (in the environment or socially) and/or work for a company that is socially and environmentally responsible.  My company has also seen that to be the Employer of Choice, they must reach out and become a sustaining member of the community – not as PR efforts, but as sincere efforts to remain viable.

These assumptions of environmental and social responsibility are because of business sense and not because they are showing themselves to be “progressive” or a “tree-hugger”.  The shareholders are demanding that companies be more transparent so that the investors can see how a company is operating in a sustainable fashion.  Investors want to make sure a company is not operating in an unsustainable manner and so TBL has become a business imperative.  I have been told that the Security and Exchange Commission is thinking of requiring companies to publish an annual Sustainability Report by the year 2015.

How does this apply to us as individuals who are Humanists?  As a Humanist, I have the ability and the responsibility to develop all that it means to be human both in myself and in others.  This definition includes the word “responsibility”.  Humanism is more than a belief system, it is also a value system and one of our values should be Responsibility.

As a Humanist, I have a responsibility to my environment.  There is a Native American saying that says “We do not inherit the Earth from our ancestors, we borrow it from our children.”  As Humanists, we need to insure that the environment will be just as viable for our future generations as it is now.  There is a movement in some of the religious circles (especially among the young) that mankind has a caretaker responsibility assigned by a god.  We don’t need to take this direction from a god to recognize our own responsibility for environmental sustainability.  We can be good without a god and we can and should do the right thing environmentally.

And as a Humanist, we should recognize our social responsibility.  We have the responsibility to do what we can to care for the vulnerable in our society, to narrow the gap between the haves and the have-nots, to care for those who are in our first degree of separation (family and friends) as well as those who are six degrees separated from us.  To sustain the global society, we need to recognize our responsibilities in all of our social milieus.  The continuation of the increase of the gap between the haves and the have-nots is not sustainable.

It is striking to see how Business Sustainability has become so prevalent in Europe while only beginning to be used here in the States.  (If I had not known beforehand how much more prevalent this is in Europe, it would have been embarrassing for me as a person from the United States at this training session.)  Although many of the top Fortune US companies are now publishing annual Sustainability Reports, it is a concept that has not become popular in the United States culture like it has in Europe – even in the European developing countries formerly of the Soviet Union.  The whole concept is part of the general vernacular in Europe and several European CEOs were meeting and discussing what they could do to attract the best talent.  They came to the decision that although most young people looking for a job do not read the company’s annual Financial Report, almost all of them (in Europe) will read the company’s annual Sustainability Report.  Over there, in order to broaden the scope of the approach beyond that of corporations, they are now using the term Responsibility Reporting.