An Interview with Spinoza on His Excommunication 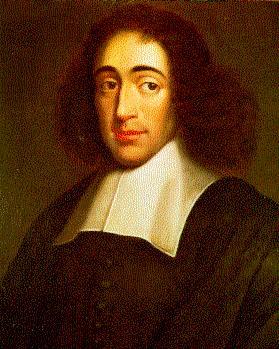 (The following is a combination of storytelling and a new genre called creative non-fiction.  Although the facts in the story are true and based on research, the dialogues and scenes are made up.)

An interview with Baruch Spinoza on his excommunication:

INTERVIEWER:  Bento, or do you prefer to be called Baruch, could you tell us your first thoughts when you heard about your excommunication?

SPINOZA:  Sure.  I prefer Baruch for that was my name in the Hebrew community in Amsterdam.  Both names mean “blessed” and I thought of the irony of my name as I received this curse.  As you know, I wasn’t there at the time that the curse was laid on me.  My first thoughts were, “Excommunicated!!!  I’ve been excommunicated?  And I’m not even Catholic.”  I wanted to say “Oh my God, or OMG in today’s electronic vernacular, but since I didn’t believe in that kind of a god, I couldn’t even say that.”  (smile)  I thought I might get a rebuke but nothing this severe.

I was very familiar with the viciousness of religion as my family had been driven out of Portugal during the Catholic Inquisitions even after they had been forced to convert to Christianity.  But I never expected this harsh treatment from the Talmud Torah congregation as I and my family were upstanding members.

INTERVIEWER:  What was life like during the time you were excommunicated?

SPINOZA:  I was excommunicated in 1656 which was a very heady time politically for both Portugal and Amsterdam.  The Dutch had taken Columbo from Portugal and King John of Portugal had died and been replaced by his son.  So we Jews from Portugal who were now in Amsterdam were very wary of our precarious situation.  Jews had been expelled prior to this from England, however Oliver Cromwell was considering readmitting Jews into England.  In fact, my teacher and mentor, Manasseh ben Israel, also a Portuguese, was in England conferring with Cromwell about our readmission at the time of my excommunication.  I still wonder if I would have been excommunicated if he had been with me in Amsterdam instead of England.  But he died only a year later so he wasn’t able to help me.  He was the founder of the first Hebrew printing press which allowed our Jewish ideas to flourish and circulate as never before.

It was a rich time artistically. Rembrandt, for all his great paintings, officially declared bankruptcy and the Dutch painter, Vermeer, was changing the world of art as he was painting the middle class rather than nobility.

INTERVIEWER:  What did you see happening in your life leading up to the excommunication that might have given you pause for thought as you look back?

SPINOZA:  Well, there were a few things going all the way back to my birth which, if I were a believer in a god, I could consider it Providence.  But since I don’t, I’ll have to say it was just synchronicity.  I was born in 1632, one year before King James of England.  But the same year that Christopher Marlowe’s play, “The Jew of Malta” was published posthumously.  It described itself as “The Tragedy of a Jew” and was used by Shakespeare in “The Merchant of Venice”.  It actually is about the struggle of power between Spain and the Ottoman empire which could easily be used as a metaphor for the power between organized religion and infidels.  It espouses that power is amoral and a quote from it could describe my life:  “I count religion but a childish toy/And hold there is no sin but ignorance”.  This thought, birthed in the same year as my birth, could easily have become my epitaph.

Another synchronicity was that the year I was born was also the year that the Leiden University Observatory was built.  This was momentous because it was the first time that observations rather than theoretical discourses were used to further knowledge at the university level about the heavens.  Telescopes and microscopes had been used by individuals but not universities before this.

My birth coincided with the Dutch colonialism as they settled in the New World in Connecticut, occupied Formosa, the English Virgin Islands, French Martinique and were expelling the Portuguese from the Gold Coast in Africa which provided a great deal of wealth through the slave trade when it was so lucrative.  Religiously, this was the period of Jansenism, which was a Dutch movement in opposition to Catholicism espousing original sin, depravity, necessity of divine grace for salvation, and predestination – much like Calvinism.  But it was this crack in independent thinking and breaking away from religious authorities and traditions that helped me to start with a crack and then create a complete break.  This was also the time of the founding of Harvard College in America, in 1639, which at that time was strictly a religious institution.

But this was also the time of the beginning of what was later called the Period of Enlightenment.  I’ve heard some people even say that I was the “spark” that ignited the conflagration of this Period of Enlightenment.  I was fortunate to be able to witness the works of Galileo and Sir Isaac Newton.  Together we were able to forge a new paradigm of basing our thoughts on observations rather than traditions.  So in a way, my life was easy and natural to develop into a life of independent thinking.

INTERVIEWER:  What exactly did the excommunication include as they placed this curse on you?

SPINOZA:  As I look at this now, I find it humorous.  It was the worst curse the Jewish community in Amsterdam had ever placed on anyone.  Here is an English translation of it:

This excommunication meant that no one could pass within six feet of me and no one was allowed to even read my work.

INTERVIEWER:  This is a very extreme curse to put on a person.  What did you do to deserve such a curse?

SPINOZA:  The interesting thing was that I hadn’t done anything at that time except raise some questions.  I didn’t even write any books until 10 years later.  But I did question anyone and everyone – even my family.  I asked questions like the following:

“Why are anthropomorphic characteristics attributed to a god?”

“How can a god be a personal god with attributes of psychology and ethics?”

“How can a god be anything other than what is found in the natural world?”

“How can a god be a cause if everything that happens happens just because it is natural?”

“How could a god divinely create the world which is only a product of nature?”

“Why are believers in a god dominated by passions of hopes and fears?  Rather than knowledge?”

“Why are religious institutions so dominating of believers through ecclesiastical authority as this only leads to bondage through psychological, moral, religious, social, and political enslavement?  Especially when true knowledge is so liberating?”

“Why are the religious ceremonies of the Jews, and Catholics, and all religions so empty and devoid of reason?”

“How can the soul be immortal if it is a part of one’s natural body?”

“How can there be any kind of a life after death?  Other than one’s knowledge and ideas and thoughts?”

“How can the Scriptures be holy?  Or divinely inspired?  Especially since they were composed over a long period of time by several authors and changed continuously with each translation?”

As I look back now, I see these questions addressed in my books, but at the time of my excommunication, all they had to go on was my questions – not my teachings.  Today, these would all be considered Humanist thoughts.

INTERVIEWER:  How did this excommunication affect you personally?

SPINOZA:  Fortunately, although I was asking all these questions, by the time of the excommunication, they had become rhetorical questions and I was no longer really seeking the answers.  I knew by then that I was not one cut out for a life based on faith but rather a life based on the pursuit of knowledge of only that which is natural and observable.

At the time, I was running the family business of importing dried fruit with my brother, Gabriel, but the business had run its course.  So I was fortunate that I could find work in a place with lenses making telescopes, microscopes, and spectacles.  Amsterdam had become a center for optics as I mentioned with the Leiden Observatory.  Also, Amsterdam had received international acclaim for its optics which is why Galileo had telescopes from Amsterdam imported to Italy and then perfected for his proving the Copernican heliocentric theory.  And we know what trouble he got into by basing his beliefs on his own observations in opposition to the Church hierarchy.  After my book was published, I was offered a chair of philosophy at the University of Heidelberg but I declined it.  I was having too much fun developing my own mind to stop and teach others.  My work with lenses may have been the death of me as it appears that I may have died from silicosis which is exacerbated by fine glass dust inhaled into my lungs similar to the fiberglass lung problems people experienced much later.

INTERVIEWER:  And speaking of books, why did you publish only one book in your lifetime?  Were you afraid of being called a heretic even though you had already been excommunicated?

SPINOZA:  As a matter of fact, yes.  The one book I published was “Principles of the Philosophy of Rene Descartes” in 1663.  I loved his way of thinking and philosophizing as if it were geometry.  Geometry is based on a minimum number of axioms and postulates and then everything is “proven” from there.  However there were a few areas where I disagreed with Descartes.  Descartes was a Dualist in that he believed in a god, or the supernatural, in addition to the natural world.  And he also believed in the duality of the mind, or soul as being distinct from the body.  I was a Monist in that I believed only in the natural world and that the mind was of the same substance, or mode, as the body.

I wrote two other books but they weren’t published until my friends published them after I had died.  Even though I had been excommunicated, I was still afraid of being branded a heretic by both Christians and Jews.  In my book “Treatise on the Emendation of the Intellect”, I promote the development of the human mind through knowledge which can be verifiable by distinguishing that which is true from that which is false.  And in my second posthumous book, “Ethics”, I emphasize Reason and I wrote: “Without intelligence there is not rational life: and things are only good, in so far as they aid man in his enjoyment of the intellectual life, which is defined by intelligence. Contrariwise, whatsoever things hinder man's perfecting of his reason, and capability to enjoy the rational life, are alone called evil.”  Even today, I would consider that a pretty good ethic to live by.

INTERVIEWER:  What advancements do you see today that you would have liked to have seen in your lifetime?

SPINOZA:  That’s an easy question to answer.  I love all the advancements that neuroscience has uncovered regarding the workings of the mind.  Through the use of fMRI’s, we have been able to observe that the mind is nothing more than the brain and all those functions of the mind are natural and observable.

INTERVIEWER:  Thank you for this interview.  After this time with you, I feel I should be called “Baruch”.