Behind the Kitchen Door - Book Review 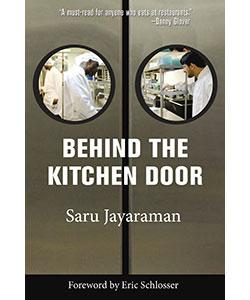 Book Review:  “Behind the Kitchen Door “ by Saru Jayaraman

And how much do we know of the “back” people?  The salad makers?  And pastry chefs?  And grill chefs?  And line chefs?  And dish washers?  We hardly ever see them to say nothing about know them.  Yet many, if not most of them are among the “Working Poor” in a society where one is paid not according to the value which they add to a product, but whose pay is minimized the most when the surplus of people looking for work is greatest – like now.

I remember years ago being challenged with the question, “What would a head of lettuce cost if our society paid fair wages to the migrant workers?”  And that same challenge could, and should be asked regarding restaurant workers.  And while this book doesn’t try to answer that question, it does raise the issue of why the working conditions of the restaurant workers should matter to all of us who eat out – not just for the sake of compassion, but also for our own safety and especially for our own enjoyment.

The objective of this book is to “ensure that dining out is a pleasurable experience for everyone – on both sides of the kitchen door”.  It describes the problems on several fronts such the fact that our society is often more concerned with the well-being of the animals used for meat for the meals than for the welfare of the workers.  Poverty wages, denying medical benefits and sick pay, tolerating racism and sexism, create an environment of exploitation and lack of hope. We need to require our society to enforce existing labor laws and raise the minimum wage for these workers.

Employers have done a good job of creating an environment filling the workers with futility and inevitability so that those with only one job skill never get a chance to advance and never get a chance to change careers.  Each chapter of this revealing book presents an issue, case studies, and then presents what Restaurant Opportunities Center (ROC) has done to address these problems.

When 9/11 happened, over 13,000 restaurant workers in New York City lost their jobs and needed help.  The author started to work with a handful of these workers and found that the environment for restaurant workers was deplorable, humiliating, and oppressive.  She and some of these unemployed workers formed ROC and ROC soon became a national movement addressing the sorry conditions of so many restaurant workers.

Many restaurants operate under a paradigm that doing the minimum will maximize the profits.  The problem here is that this is an unsustainable approach as it is only a short-term approach looking at only the financial bottom line immediately.  To be sustainable, a restaurant, actually any business, needs to approach their business in a sustainable fashion by asking the question:  “What do I need to do today to be viable 20 years in the future?”  This means that the focus needs to be shifted from the shareholder to the stakeholders.  If the stakeholders, such as the workers, are not treated in a sustainable manner, the business will not be viable in the long term.  The current environment of many restaurants is unsustainable for the stakeholders due to poverty-level wages, wage theft by management, discrimination, and lack of benefits.

Lack of benefits includes non-promotability and also no health benefits.  Many workers are forced to go to work even when sick because they need those few dollars.  This increases the odds of food-borne illnesses being passed to the consumers as well as often makes the sick worker even more sick.  The industry puts workers at high risk of injury (burns and cuts) without providing them the wages or health benefits to deal with them.  Restaurant workers are the third highest in total number of non-fatal occupational injuries and illnesses in the US.

Restaurant workers hold 7 of the lowest paid occupations in the United States at an average of $8.90 an hour after tips.  They are the Working Poor as this amount does not allow them to pay rent for a modest apartment on their own.  And considering that many workers have dependents, either children, or parents, the problem is extreme.  In many States, they are paid a minimum of $2.13 an hour by their employer and then a meager share of the tips.  This minimum has been frozen for the past 20 years.  The restaurant owner must see that the minimum, plus their share of the tips equals the standard Federal minimum wage of $7.25.  However many managers will clock a worker out early, or skim money from the tips personally.  This is why many, if not most restaurant workers need food stamps for subsistence.  Which means that the government is subsidizing the restaurant industry.  Because of a lack of oversight of managers, some workers don’t receive the minimum pay, some don’t get proper overtime pay, some don’t get paid for all the hours they are required to work, and some get paid late or not at all.  Some are even required to pay for customers who walk out without paying.

Racial discrimination is rampant in restaurants.  White workers get to wait on tables while people of color are relegated to more servile positions like bussing or dishwashing.  Workers are segregated in the workplace by position in the restaurant (server, busser, dishwasher), segment of the industry (fine-dining, family-style, and fast-food), and location (poor, middle-class, and upper-class neighborhoods).  Diversity of color within a restaurant does not mean that there is equality in position or advancement opportunities.  Managers can be very discriminating when it comes to position as well as advancement because they are seldom held accountable for their decisions or actions.

Sexism is also rampant in restaurants.  The median weekly wage for women for servers is $387 while for men it is $423 – a difference of almost 10%.  Most women who get positions of chef, are relegated to the lower paying positions of pastry chef or salad chef with little or no hope for promotions.  Many female chefs from culinary schools or with hospitality training wind up as cake decorators in supermarkets.  And sexual harassment is ubiquitous.  Women experience this from the male consumers, from management, and from the other workers.  Since managers are considered “untouchable” in terms of recourse, they often try to get away with as much as possible.  And since the managers are the ones who determine positions, hours, and promotions, they often expect “favors” from the female workers.

What can and should be done by the average consumer?  1)  Adopt a definition of “sustainable food” that includes sustainable labor practices; 2) Talk to the workers when you eat in a restaurant; 3) Engage restaurant managers in a conversation about labor practices; 4) Help raise the federal minimum wage for tipped workers!  Tell policymakers and restaurant managers that you think $2.13 is unacceptable; 5) Vote for paid sick days for restaurant workers.  And tell restaurant managers you consider workers’ health when choosing where to eat; 6) Picket with your wallet – don’t eat in restaurants segregated by race and gender; and 7) Join the ROC campaign to support workers all along the food chain.

I found this book to be a wealth of resources for gaining empathy for these restaurant workers.  It was very similar to another book I read “Nickel and Dimed” by Barbara Ehrenreich.  In this book, the author travelled to five places in the US and attempted to live on the minimum wages of $7.00 an hour.  Her final point was that – it cannot be done without devising ways to beat the system or without safety nets.  Both books are revelations into the lives of the Working Poor.  The Working Poor are those people who work 40 hours a week (or as much as they can) and still cannot afford the necessities of life.  And this is a timely issue as there is much discussion about this as in the Huffington Post article about the Working Poor.  Also, recently in the Huffington Post there is yet another article about raising the minimum wage.

I was surprised that the author did not make a greater case for the irresponsibility of the managers because there is seldom any oversight or responsibility to a Human Resources Department like there are in many business offices.  And I would have liked more information on the training programs for hospitality students and also other groups dedicated to helping the restaurant workers such as unions.

But this eye-opener tells us a lot about this industry and how it operates from the inside on both sides of the kitchen door and what is required for a restaurant to be sustainable.  And the biggest factor in a restaurant being sustainable is for the consumers to be aware of what it takes.  Transformation will only come when consumers are knowledgeable and insistent that restaurants be managed in a sustainable fashion.

(Note:  While reading this book, I took extensive notes which were then culled to develop this review.  For anyone interested, they may view the 7 pages of notes at this address:  http://writemeister.blogspot.com/2013/12/behind-kitchen-door-book-details.html)