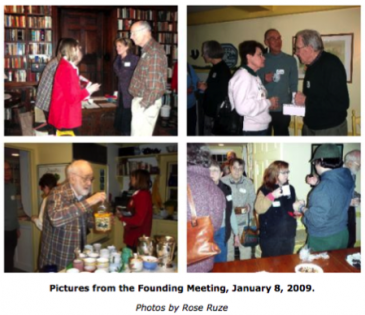 Greetings!  Two weeks ago, CAH had its last event of the season.  We will pick up again on October 3, in Parish Hall, 7 pm, when David Ropeik will present “Cognitive Limits on Human Reason”.  This was scheduled for February, but was postponed because of heavy snow. We hope the October weather will be better.  Do enjoy the intervening Summer and come back eager for the new series we are planning for the Fall, starting with David.

CAH was launched on a snowy evening on January 8, 2009. It and the following meetings are recorded in our first few blogs, 13 pages back on this web site. Some photos of that meeting are recorded here.  Sadly, a few of those founders are no longer with us.

There followed about 61 later blog articles.  This history has now included about 80 events.  We started meeting in the Wright Tavern, which is the historic old red building almost under the flagpole in Concord Center.  This tavern was the British Headquarters when the British soldiers marched into Concord on April 19, 1775. They marched back to Cambridge later in the day, pursued by the Minutemen from surrounding towns.

As our CAH numbers grew, we moved the meetings into the Parish Hall of the also historic UU Meeting House.  That Meeting House has been rebuilt about six times since it started at the top of the hill, across Lexington Road from where it is now. It was originally the Meeting House for the Town Government as well as for the original Puritan Settlers. The present Meeting House replaces the previous one, in the same place, that was destroyed by fire in 1900.  The old scorched bell still sits in front of the “new” Meeting House.  The clock in the steeple is still owned by the town, dating back to the early days when the Meeting House served the Town as well as the worshippers.  We are carrying on the tradition of multiple uses of the Meeting House, since CAH is an area-wide secular organization.

As CAH goes into its second decade, we will try to maintain the energy in continuing its ambitious program into the future.  We hope some new talent will join us.  The present Steering Committee needs a few more members to replace those who are aging out, or want more time for other activities.